Rafael Viñoly Architects first opened in New York City in 1983, housed in a small office on Bleecker Street. It quickly grew to a staff of 30 people working on both academic projects and projects for New York City developers. From the outset, there was no stated specialization of building program, function or context. One of the firm’s most significant projects from this period, the John Jay College of Criminal Justice, became a benchmark for the firm’s approach to projects in terms of overall leadership, design principles, and collaboration with all the major project stakeholders. The College of Criminal Justice, 33,450 square meters (360,000 square feet) of new and renovated space comprising the first phase of a 111,480-square-meter (1.2 million-square-foot) master plan for an entire block in Manhattan, was built in 24 months on a fast-track schedule. It housed a variety of programs for academic and recreational use, all contained within a landmark former public high-school built in 1906. An early honor for the firm came with the recognition of the design solution, which organized the academic, recreational and public functions around a central day-lit atrium, recognized by the Municipal Art Society and the City Club with two awards 1988 and 1989.

Another representative project from this period includes the 48,310-square-meter (520,000-square-foot) office tower at 900 Third Avenue in New York City. Its distinguishing features are a triple-height sky atrium positioned at the 13th floor of the 36-story building. Rafael Viñoly Architects’ design, the result of working together with the developer, maximized flexibility for space planning choices and also offered a distinct identity for the project from the exterior, weaving it into the city skyline and streetscape.

A final keynote in this period is the scale and complexity of approvals and implementation called for to complete the Lincoln West Development plan, which foretold the magnitude of the firm’s work to come in subsequent decades. Rafael Viñoly Architects led a four-year-long process of community interaction and collaboration with the City Planning Commission of New York, which concluded with rezoning approval for the abandoned Penn Central rail yards, allowing the development of a mixed-use residential and commercial site, with over 1,021,930 square meters (11 million square feet) of space. To this day, construction on that site has to comply with the rezoning Rafael Viñoly championed during this period. The plan successfully negotiated the requirements for public access to the Hudson River waterfront while simultaneously developing the views of the river over the adjacent elevated highway as an amenity for the residential units. In a sense, the firm’s foundations as a company that could navigate community interactions and public approvals on the ground while preserving a design which benefited the client but whose primary offering was an improvement benefiting the public realm, were laid with this project.

Jay Bargmann assumed the role of Vice President early in this period, contributing to the development of the firm’s approach to implementing large and complex projects. 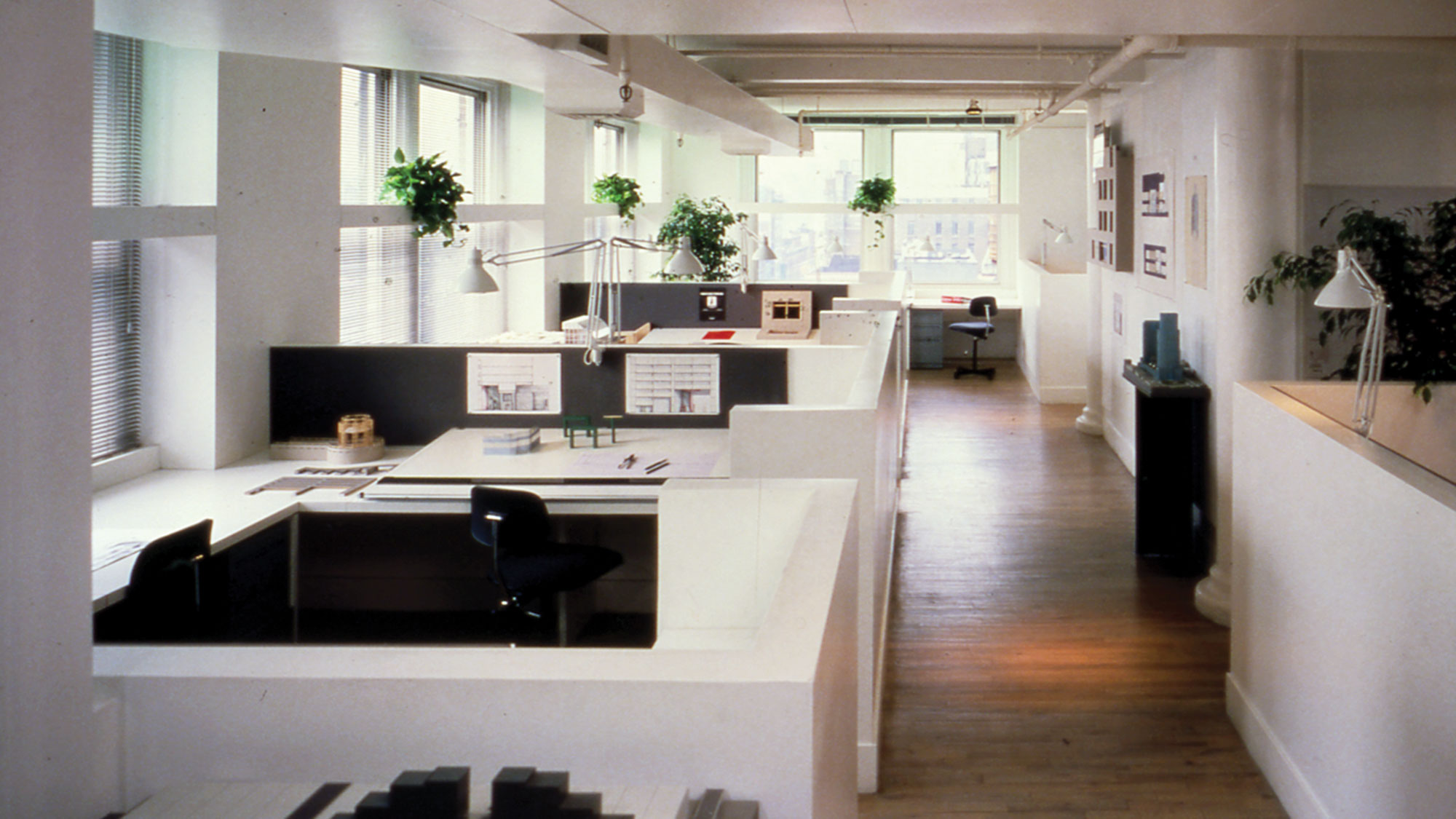 In 1989, the Tokyo Metropolitan Government organized an anonymous international competition to design a major new civic complex that would become the focus of cultural life in the capital. Rafael Viñoly Architects’ entry was one of four hundred from fifty different countries, and it won the competition with a scheme that organized the ambitious arts and exhibition program functions around two major public spaces facilitating connections to the City at the street level with an open-air plaza, and linking the project to rail stations below ground, and to four large theaters above, by means of a great glass hall.

This commission ignited Rafael Viñoly Architects’ growth in this period: the company very quickly became an international firm of 150 architects with projects throughout the United States and in Japan, South Korea and Latin America whose clients included prestigious academic institutions and civic organizations.

The Forum project marked a second major development in the firm’s working process that was implemented with numerous subsequent projects at a range of scales: collaboration through establishing a site office. Throughout the documentation and administration phases of work, Rafael Viñoly Architects maintained a full architectural in Tokyo, including the project leaders, model makers and project architects. This team worked together with engineers, fabricators, owner’s representatives and the builders in order to optimize the design in relation to schedule, constructability and budget. The New York-based team supported the project through the issuance of coordinated bid packages and design analysis, the building of physical prototypes, and the development of options and design alternatives. By now the practice had relocated to 50 Vandam Street in Lower Manhattan, a former factory with large, flexible spaces and ample daylight, where the firm still resides today. The unique character of this space and its team-based open organization influence the kind of work the architectural staff in the practice produce.

Alongside the massive civic and cultural project in Tokyo, the firm’s institutional portfolio was steadily growing at this time. Projects such as the Lehman College Athletic Facility, the Queens Museum Renovation, and William Paterson University’s Master Plan and Academic Building were all designed and executed in the first half of the 1990s. These projects presaged a major body of work to come in the future.

This early period of consolidating experience in several genres of building typology and master planning fostered several of the most important principles  that guide Rafael Viñoly Architects’ work, and led to a decision to stabilize the size of the firm to make the working practices needed to foster these ideas possible. 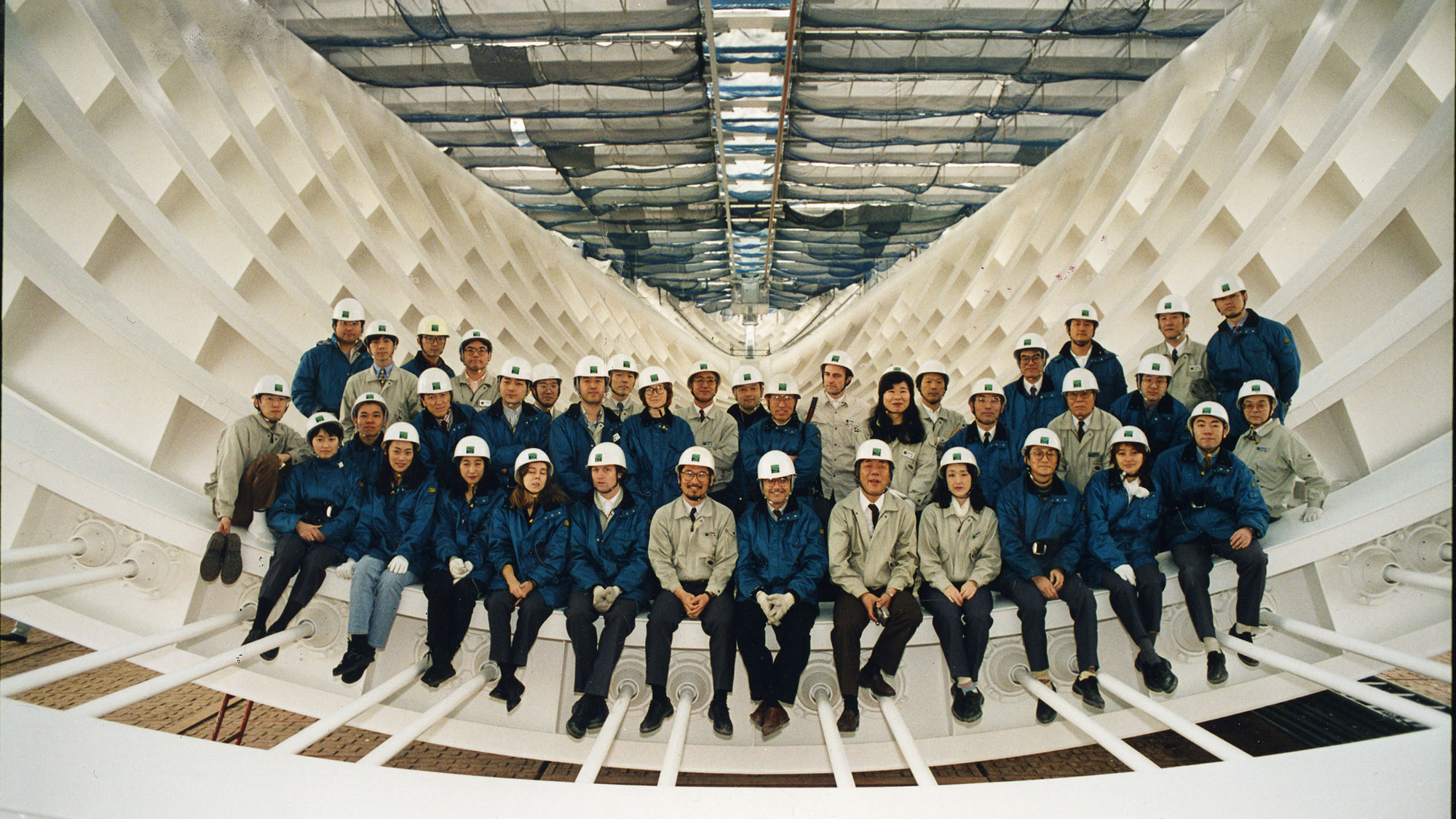 In the late 1990s, the size of the firm stabilized at 175 architects and the firm’s work expanded in the civic realm with the David L. Lawrence Convention Center in Pittsburgh, PA, awarded following a design competition (the only gold LEED-certified convention center in the world at the time; the project has subsequently achieved a LEED platinum rating), the Boston Convention and Exhibition Center; the Kimmel Center for the Performing Arts in Philadelphia, PA; and the Fortabat Museum in Buenos Aires, Argentina. During this period, a series of important laboratory projects were also designed and built, beginning with the Van Andel Institute in Grand Rapids, Michigan. Other research projects include the Carl Icahn Laboratory/Lewis-Sigler Institute for Integrative Genomics at Princeton University; the UCLA Nanosystems Institute; and the UCSF Helen Diller Family Cancer Research Building which were all in design during this period. This early laboratory research work culminated in a new research campus for the Howard Hughes Medical Institute Janelia Farm Campus, which opened in 2006 and which won the 2007 R&D Award for the Best Laboratory based on its patented casework which allows reconfiguration without renovation, its sustainable planning principles and integrated green roofs, and its thorough response to the unique research mandate of the campus.

In light of the diverse projects scattered all over the globe, in 2001 a new management system was developed that allows for increased communications among all members of each project team, while creating the possibility of immediate response. The Project Directors were identified as capable of overseeing multiple projects, working in conjunction with Project Managers who are one hundred percent dedicated to a particular project. Directors also participate in firm-wide issues and decision-making such as office standards and new business proposals, as well as leading design competitions. This is not a design studio or specialty group arrangement; the system yields experienced project management units that staff projects flexibly and transparently, with strong individual relationships – and therefore accountability – ¬ to clients. In 2009, the firm leadership was further consolidated with the identification of five partners.

Simultaneously, the technical group was formed as a way of consolidating ongoing programs of research and architectural innovation in order to systematically support all projects within the office. The product of its efforts often can be categorized as leading-edge developments in systems such as building enclosure and curtain walls, laboratory casework, and heavy/large-scale structures. This group includes structural engineers, fabricators and interior designers as well as architects, and is marked by frequent interactions and collaborations with industry specialists as well as with clients and general contractors. The technical group aims to provide continuity of approach to design issues – not to be confused with visual consistency – and high quality, on all projects.

Out of this collaborative experience pursuing technical innovations, and through the firm’s emphasis on learning through direct application, Rafael Viñoly Architects initiated the Architectural Training and Research Programs in 2005. The courses are taught by Rafael Viñoly together with the Project Directors, who together with Jay Bargmann also oversee the Research Program. The Training Course is geared for practitioners and advanced students, and it offers a practical approach, drawn from professional experience, to solving some of the basic problems involved in making buildings. The Research Program offers fellowships to pursue individual research projects that have the potential to advance any aspect of the art, craft, or practice of architecture. Professional Development courses are also offered regularly within the firm.

In 2008, in celebration of the firm’s 25th anniversary, the Research Program issued an expanded call for proposals. Research topics dealing with urban conditions associated with societies in rapid transition were sought. In order to achieve a broad reach, the RFP was issued in six languages: English, Spanish, Arabic, Chinese and Russian. Throughout 2009 and 2010, research projects centered on the performance of disaster housing in Aceh, Indonesia.

In October 2000, on the heels of a new commission in Amsterdam (Mahler 4) and later a Wageningen University building in the Netherlands, followed swiftly by competition wins for the $33 million firstsite:newsite, Visual Arts Facility in Colchester and the $124 million Leicester Performing Arts Centre, Rafael Viñoly Architects established an office in London. This has allowed for close oversight of these and other subsequent projects, and establishment of a local presence in Europe. The London Office acts as a branch from which project management and client liaison functions occur. Design functions remain centralized under the direction of Rafael Viñoly who travels frequently between the New York and London offices. Technical Director Charles Blomberg also spends an equal amount of time in London in order to ensure that projects managed remotely are complying with office standards and that lessons learned from all projects are being distributed to all professional staff. 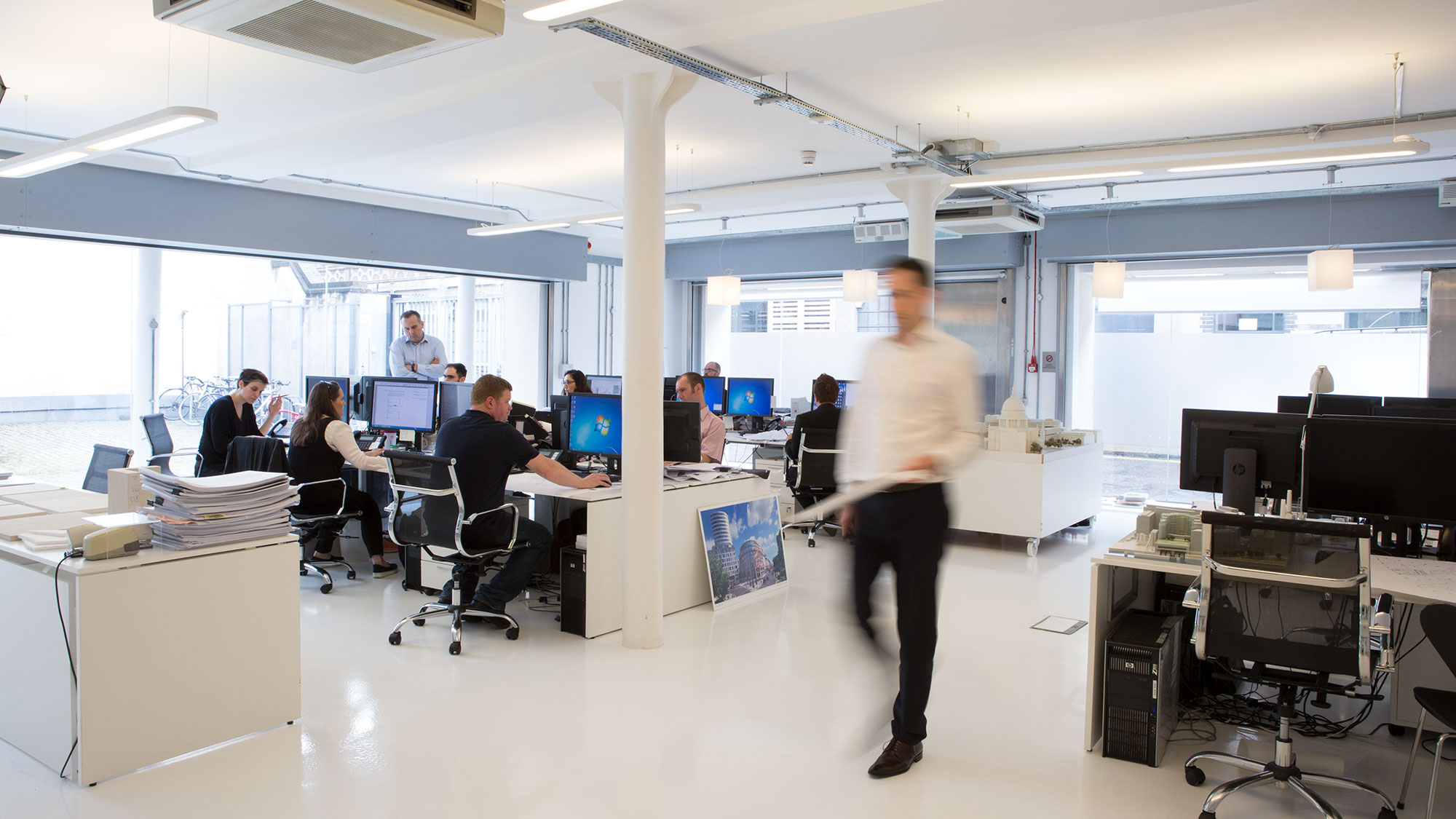 During the most recent decade, Rafael Viñoly Architects has been commissioned and has implemented numerous new building typologies including hospitals for clients such as the University of Pennsylvania and the University of Chicago; major commercial and academic master plans including the Battersea Power Station; large commercial and residential buildings including 20 Fenchurch Street and 432 Park Avenue; airports including Abha Airport in Saudi Arabia and the Carrasco International Airport in Montevideo, Uruguay; and sports projects such as the Manchester City Football Club campus in the United Kingdom. The firm also expanded its presence in the Middle East by securing several major commissions in the United Arab Emirates, Qatar, and Saudi Arabia, including the new campus for New York University Abu Dhabi, open for the fall semester 2014.